Northern Ontario Members of Parliament are asking that the Federal Electoral Boundaries of Ontario maintain the Algoma-Manitoulin-Kapuskasing riding.

AMK MP Carol Hughes is being joined by all the northern MPs in sending their concerns to the commission that Northern Ontario should not pay the price of having its representation dwindle to satisfy population growth in bigger centres.

Hughes points out the Electoral Boundaries Readjustment Act provides the grounds for departing from the normal rules and for exceptions to population variances “in circumstances viewed by the commission as being extraordinary”, which was the basis for maintaining Kenora as an undersized riding in the last redistribution and should be considered for AMK.

The commission has recommended AMK be eliminated and be divided between the ridings of Sault Ste. Marie and Nickel Belt.

A copy of the letter is provided below in its entirety. 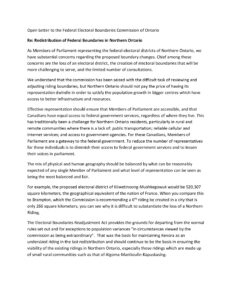 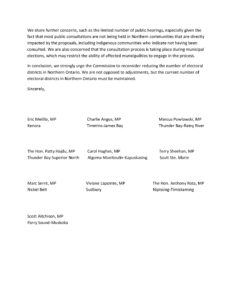