Fighting fires in the bush

She says the volunteers had some training in the past, but with the MNRF providing a certified course, the firefighters decided to participate.

Goodchild adds it was an excellent opportunity since the local fire crews put the training to good use successfully fighting two large bush fires this past Sunday and Monday.

Goodchild says the crews used to train every second week but, in an effort to get everyone on the team up to certification standards, they have changed to weekly training, Tuesdays 7-9pm with a new training committee preparing and planning the schedule. The team is comprised of all volunteers with an assistant chief and two captains at each of the three halls, a fire prevention officer, a training officer and a public information officer who are also volunteers.

She emphasizes they are quite low in their numbers because of recent certification standards set by the Office of the Fire Marshal, so new volunteers are more than welcome.

Anyone interested in becoming a volunteer firefighter, can reach out via email at fire@sables-spanish.ca

Typical ways brush fires get started/out of control:
Goodchild says most bush fires are unintentional, such as caused by lightning, cigarette butts, glass on dry fuel (grass, woody materials, etc.), sparks from a train or exhaust on dry fuel. She says embers carried in windy conditions can easily jump roads with dry conditions facilitate rapid spread of fire, overhanging branches or nearby trees/shrubs catching fire and the incomplete extinguishing of campfires
Although we can’t always control the first set of conditions, she says we control the second and the township’s open air burn bylaw is written to keep burning safe.
Good child adds upcoming events include the Canada Day Fireworks, the Father’s Day BBQ and Bottle Drive on Sunday, June 19th 11am – 6pm at the Webbwood Outdoor Rink and their Fireworks Fundraiser Dance on Saturday, June 25th 8pm – 1am at the Webbwood Eagles. 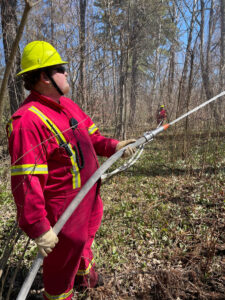 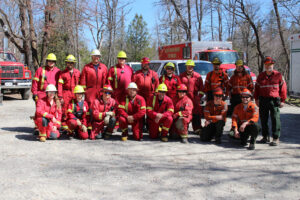