The Elliot Lake court has imposed restitution and house arrest on an Elliot Lake resident found guilty of breach of trust and forgery.

Katherine Collettpleaded guilty to a charge of breach of trust and one count of forgery last month and was in Elliot Lake court over the last two days for her sentencing.

Collett pled guilty to stealing over $16,000 from the Elliot Lake Skating Club between March 2018 and March 2020 in her role as volunteer treasurer.

The judge sentenced her to eight months of house arrest, four additional months with a curfew, two years probation, and she must also pay full restitution.

Club President Sarah Bujold who attended the hearing says Collett cleaned out their accounts and as president, she was able to submit a victim impact statement to the court.

She adds Collett has already made some restitution, but there is still $7,500 owed back to the club coffers.

Bujold adds the club is glad to have the case resolved and is looking forward to rebuilding the organization.

She says the club is winding down its season, but will be looking for new registrations later in the summer and extends a thank you to those who have been assisting the club in getting back on its feet.

Club President Sarah Bujold provided The Moose with her Victim Impact Statement on behalf of the club. It is printed here with her permissions. 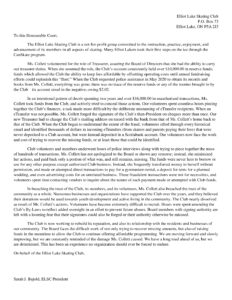