The firm Expertise for Municipalities Non-Profit Association, known as E4M, acting as the Integrity Commissioner in Elliot Lake during the Councillor Ed Pearce proceedings, released a report to the city Friday concluding that he intentionally breached his obligations under the Municipal Conflict of Interest Act.

The matter went before a judge who did find Pearce guilty in 2020 but stated there was no intention to breach the Act and he had not benefited from failing to declare he was a member of a local business development corporation when the council held a discussion about the entity.

E4M appealed the decision, but Pearce was cleared after another court heard the appeal last year.

Pearce says the firm’s report is “misleading and self-serving” and calls on Elliot Lake city council to pay the $16,000 in costs awarded to him by the Divisional Court.

He says E4M is fully aware that it is their responsibility to pay, not the City of Elliot Lake.

Pearce adds the release also fails to mention that he had publicly apologized to Council and offered not to fight the charge, but E4M and its lawyers refused his offer opting instead to put him and the city through a three-year process that cost the city over $100,000. 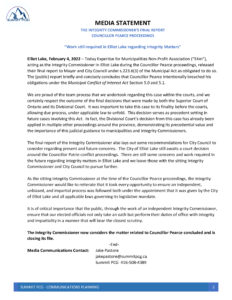 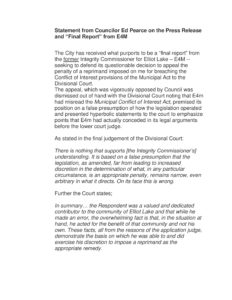 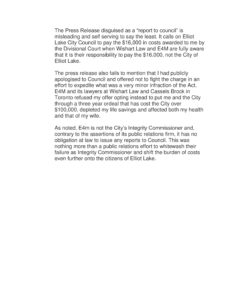