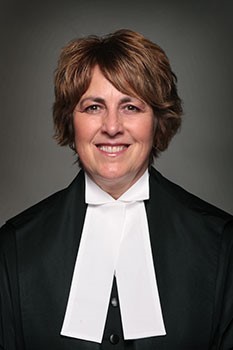 Carol Hughes shares her views on the Throne Speech. Photo supplied by Carol Hughes and used with permission.

Algoma-Manitoulin-Kapuskasing MP Carol Hughes is not impressed with the Throne Speech.

The NDPer is disappointed that there is no mention of pharmacare or dental care in the presentation, which she believes could deliver considerable cost savings to the health care system and help lower income Canadians.

Considering the pandemic, she says there was nothing about a wealth tax to account for the way most fortunes are amassed in Canada or of closing income tax loopholes that account for billions in foregone tax dollars every year.

Hughes says she would also like to see web giants being taxed to operate in Canada.

Hughes adds she will continue to advocate for funding for First Nation children, climate change initiatives and ways to build affordable housing.

VIEW FROM THE HILL

Throne Speeches are predominantly aspirational in nature and can be ambitious and optimistic in tone.  That wasn’t the case this week when the Governor General delivered a speech that was short on commitments and muted in tone.  It’s as if the government doesn’t want to raise expectations, which is a bit of a surprise considering it usually nails the performative stuff but falls short delivering.

While it’s true the Prime Minister hoped that parliament would take a more advantageous shape when he called an election in August, Canadian voters didn’t share that vision.  Instead, they returned a near carbon copy of the previous parliament and demanded action on issues that dominated the previous (2019) election but were largely waylaid by the pandemic.  One would have expected those items to populate the Throne Speech, but there were glaring omissions that indicate some commitments may have fallen off the agenda altogether.

To begin, there was no mention of pharmacare or dental care.  While these are NDP policy initiatives, the government campaigned and communicated on these ideas – especially pharmacare.  With no mention of either in their parliamentary blueprint, it appears they aren’t interested in pursuing either measure – both of which deliver considerable cost savings to our health care system and to lower income Canadians who could use a break.

With concerns over costs associated to the pandemic coming into focus there was no indication that the government would be pursuing perennially foregone sources of income.  There was nothing about a wealth tax to account for the way most fortunes are amassed in Canada.  There was no mention of closing income tax loopholes that account for billions in foregone tax dollars every year. And, there was nothing about taxing web giants who basically operate free of charge in Canada while our media companies play by all the rules which includes paying their taxes.

Considering that the search for children in unmarked graves at the sites of former residential schools played an important role in the federal election, it is shocking that there was no plan for the government to stop fighting First Nations kids in court over a monetary settlement awarded by the Canadian Human Rights tribunal.  The government has heard repeatedly from Canadians and the courts that it is time to make restitution. Still, they refuse to comply, choosing to spend public funds on lawyers instead.  Additionally, the need to build affordable Indigenous housing preceded the pandemic which only magnified the challenges associated with the current housing stock.  That didn’t rank a mention in a speech loaded with talk of reconciliation but limited in details or initiatives.

With devastating floods in BC, wildfires over the summer, and extreme weather events increasing in frequency and intensity, Canada needs to step up in the fight against the climate crisis. The Throne Speech offered an opportunity to signal an end to fossil fuel subsidies while offering a path to help workers and communities transition to a renewable future.  The government walked right past that opportunity.  As events like the devastating flooding in BC illustrate the magnitude of the challenges that will shape our future, the plan to adopt the technology that will allow us to meet our goal to avoid the worst consequences of climate change becomes more elusive.

The Throne Speech was an opportunity for the government to move past empty words and symbolic gestures and act to help Canadians. As people are trying to recover from the pandemic, many still need help to get back on their feet. The next few weeks are an opportunity for MPs to show Canadians that we came to parliament to work together for them.  The government knows what issues we can move forward on to make that happen.  Not all were in the Throne Speech, which is why New Democrats will press for their inclusion as we negotiate the upcoming legislative agenda.