City of Elliot Lake vaccination policy will be enforced 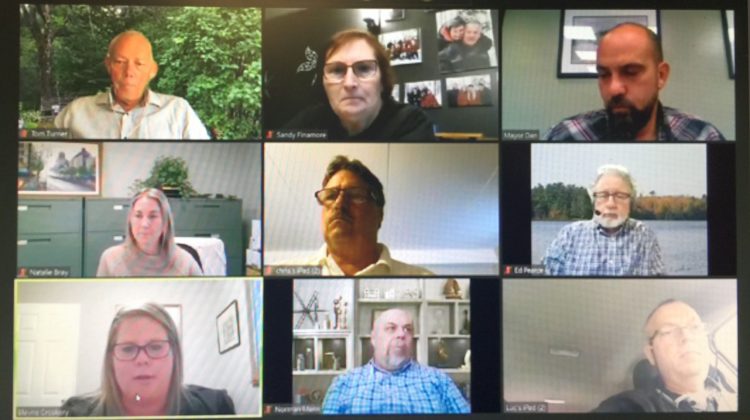 : A discussion was held by Elliot Lake council to deal with a vaccination policy. Espanola council will deal with the same issues tonight. Municipalities are following the provincial and federal mandates. Unvaccinated individuals could be denied entry without having proof of vaccination. Photo by Rosalind Russell – City of Elliot Lake Zoom Special Council Meeting – September 21 2021.

COVID-19 Vaccination Passport Policy in Elliot Lake will be enforced by bylaw officers.

Council held a meeting on Tuesday to deal with the new requirements of the province.

Councillor Chris Patrie disagrees with the policy saying the province should be enforcing it, not municipalities and Councillor Luc Cyr says it is against legislation already in place.

Cyr adds it was a violation of multiple federal acts of which the weakest on was the charter of rights and freedoms because that province reserve the right to invoke the Notwithstanding clause with the charter. They cannot do so with these other two federal acts; Government of Canada BILL S-201 and Canadian Human Rights Act.

H.R. Coordinator Blayne Croskery says the government has a right under the Limitations Clause of the charter to justify infringement of human rights for the greater good.

She adds bylaw officers will be in place at public gatherings, such as hockey games, and if need be, police can also be called in.
The policy applies to all indoor non-essential programs and activities in all municipal buildings regardless of risk profile.

Residents must produce photo ID and a copy of the vaccine receipt received following administration of the second vaccine dose to enter municipal properties.

For added clarity, this does not apply to traditional municipal services typically provided by City Hall staff (taxes and water, building and clerk services) but will apply to all indoor recreation programs (arena, pool, Collins Hall).

The implementation of the policy may cause costs to be incurred that are being researched now.

before anyone can enter into a rec facility.

Over time, it is expected that the costs would decrease as the province rolls out more automated passport technology that can decrease pressure on the wages line.