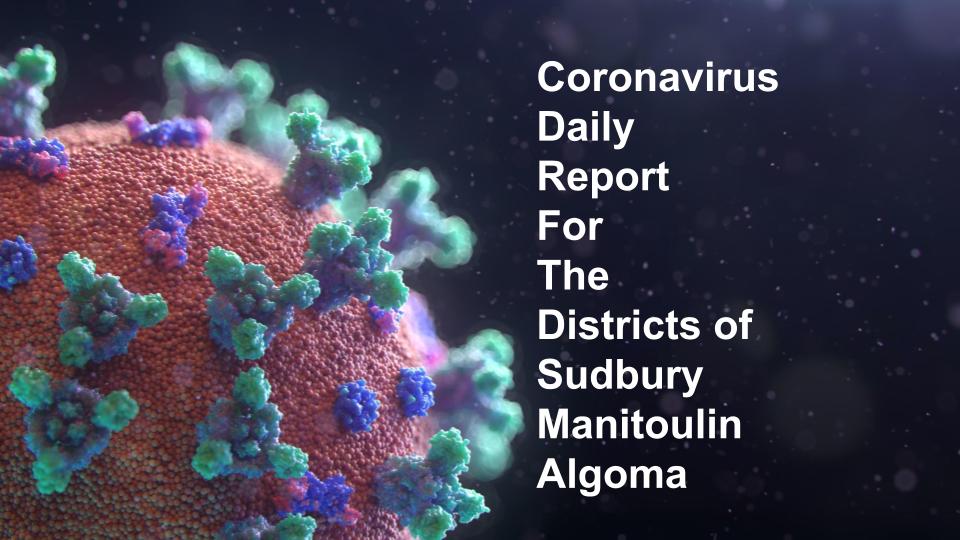 A look at local district numbers …

The agency states all three cases are in Greater Sudbury.

Considering resolved cases, there is a decrease in active cases at 56.

Of those six are confirmed cases with two in intensive care.

The other seven are waiting for test results.

And Algoma Public Health is reporting 25 active cases in the district with two people in the hospital.

UK variant found in Sudbury …
Public Health Sudbury & Districts received confirmation from Public Health Ontario that an individual in our service area has tested positive for the COVID-19 UK variant (B.1.1.7). This confirmation follows the report on January 25 of a possible case of a more highly transmissible strain of COVID-19. In addition, Public Health has been notified of three further possible cases in individuals in our area. Two are individuals who had returned from international travel who were completing quarantine. The other is in an individual who was self-isolating as a contact of a known case of a COVID-19 variant of concern (VOC) in another public health unit jurisdiction. Further confirmatory sequencing of these three additional samples is underway.

“The confirmation of the new COVID-19 variant of concern in our service area is a reminder that we are all vulnerable and we are not somehow specially protected,” said Dr. Penny Sutcliffe, Medical Officer of Health with Public Health Sudbury & Districts. “The virus spreads in the same way as regular COVID-19, but it is much more infectious. This can result in more cases, which means that more people could become seriously ill, while others may lose their lives. The key message to slow the spread as long as possible is that we must ramp up our prevention measures and truly limit or even avoid our contact with people outside of our own household,” added Dr. Sutcliffe.

As there is evidence that these variants spread more quickly, intensified case and contact measures are being taken and include extending the isolation duration for the case, more readily identifying close contacts, and ensuring isolation of all household contacts of confirmed or probable cases as quickly as possible. Like with all confirmed cases, Public Health was in contact with the individual with the confirmed COVID-19 UK variant to review their initial positive COVID-19 test result and investigate possible exposure settings as well as any close contacts.

There is no evidence to date of spread of the COVID-19 variants in our service area; however, COVID-19 variants are present in Ontario, and we are not immune to their spread in the north. Early evidence shows that vaccines are anticipated to be effective against this new variant.

Ontario health officials say variants of the coronavirus are spreading more widely across the province.

An analysis of tests done on January 20th shows 5.5 percent came back as either the U-K or the South

African strains, which are much more contagious than the original version of the virus.

The vast majority were found at the Roberta Place long-term care facility in Barrie, where more than half of the home’s 127 residents have died of COVID-19.

Public health experts have said the U-K variant is expected to become the dominant strain in the province by March.

Ford says there’s no bigger football fan than himself, and he’ll be rooting for Tom Brady and the Tampa Bay Buccaneers.

But he adds he’ll be watching the game at home, with members of his household and everyone else should be too.

Ford is urging people to order pickup or delivery from local restaurants to help keep them afloat and to avoid the chance of spreading the coronavirus.

The lockdown and the reopening …

There’s still no word on when businesses in the province may be allowed to resume some operations.

The government’s stay-at-home order and state of emergency are due to expire next week.

Williams adds he wants to see how school reopenings proceed.

The hardest-hit areas in and around Toronto won’t see schools resume in-person classes until February 16th.

On Wednesday, Premier Ford said he might have a reopening plan to unveil on Monday.

But his office says, at this point, no announcement is planned.

Measures taken to limit the spread of COVID-19 are also having an effect on seasonal flu cases.

Doctor Williams says, since the flu is transmitted the same way as the coronavirus, the wearing of masks, physical distancing, and hand-washing have severely reduced its spread.

Federal officials say the number of cases detected across Canada is so low that they can’t yet declare a start to the annual flu season.

Delays on the vaccine …

Federal officials admit there will be more reductions in the supply of COVID-19 vaccines later this month and they’re not sure why.

Moderna has already reduced its shipments this month and has now informed Canadian officials that deliveries in the second part of February will also be lower than expected.

Major-General Dany Fortin, in charge of the federal vaccine rollout program, says Moderna hasn’t yet said how many doses will be arriving, or why the shortfall is happening.

But he adds he’s still expecting the company to live up to its commitment to supply two-million doses by the end of this month.