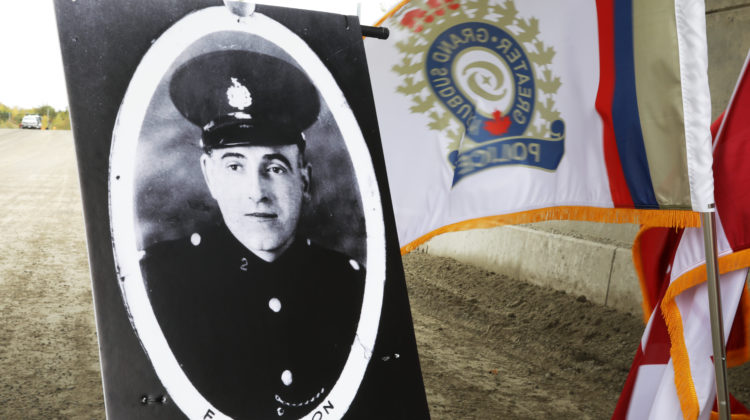 The Sergeant Frederick Davidson Memorial Bridge dedication was held yesterday afternoon to honour the dedication of a Sudbury police officer who died in the line of duty. Greater Sudbury Police Constable Kaitlyn Dunn says though Davidson was killed in the line of duty in 1937, the passage of time has in no way diminished the sacrifice that he made. She says the mayor and other dignitaries attended the dedication of the bridge 1.4 kilometers south of the Estaire Road interchange on Highway 69. Photos by GSP Constable Kaitlyn Dunn

A Sudbury police officer who died in the line of duty over 80 years ago was honoured yesterday with a dedication of a bridge in his name.

Yesterday, she says, the Sergeant Frederick Davidson Memorial Bridge dedication was held on a bridge about 1.4 kilometres on the Estaire Road interchange on Highway 69.

She says the mayor and several dignitaries spoke about the dedication of officers, especially Davidson’s contributions, followed by a moment of silence and the unveiling of the plaque.

On July 11, 1937, Sergeant Davidson attempted to question two men who were changing licence plates on a vehicle on the street. One of the men pulled a gun and shot Sgt. Davidson six times, twice in the head and four in the back. Fatally wounded, he died in hospital nine days later. He was able, however, to identify his attackers prior to his death from photographs.

The suspects were Victor Gray and Tom Ponomanenko who were subsequently cornered by a police patrol near the Spanish River railway bridge. Gray was killed in the shooting that followed and Ponomanenko, wounded. He was charged and convicted of murder and hanged in Sudbury at midnight January 22, 1938.

Still, with the story, Dunn says they also launched this year’s virtual 460km Peace Officers’ Memorial Run that usually starts in Toronto and ends in Ottawa leading up to this, Sunday, National Peace Officers’ Memorial Day.
She says at the conclusion of the bridge dedication the Sudbury Police Run Club ran to the Sergeant Rick McDonald Memorial Bridge at the Highway 17 by-pass, the first leg of a three-day run. 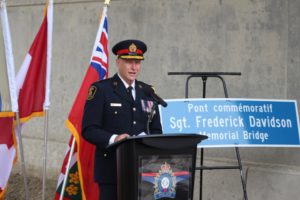 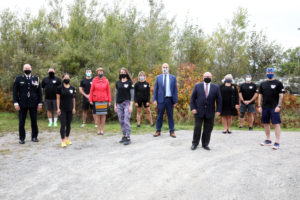