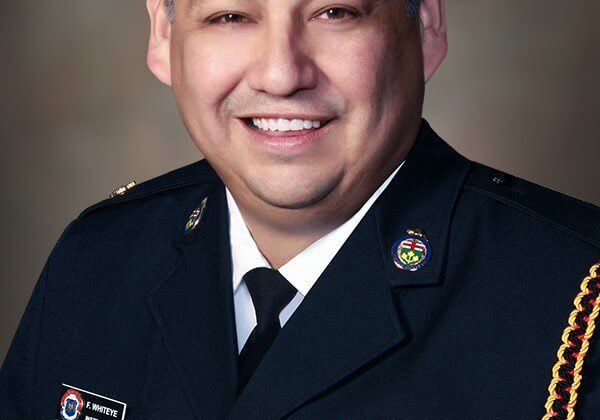 A team leader and constable instructor will be taking over the helm of the United Chiefs and Councils of Manitoulin Police.

The UCCM Police Commission has appointed Faron Whiteye as the Chief of Police.

Whiteye has over 23 years of experience in First Nation policing including working at the Ontario Police College as an instructor with the Basic Constable Training Program in Firearms and the last two years as Team Leader in Criminal Investigations.

Whiteye has been married to his wife Patricia for 23 years. Patricia holds her BSc, MEd. Their three children also are quite accomplished. Their eldest son Alistair (23) serves with the US Marine Corps as Crew Chief on a Huey Helicopter.  Aiden (21) serves with the US Marines, is the Designated Marksman in the Fleet Anti-Terrorism Security Team and their youngest, Abigail (19) attends University at Eckerd College on a full scholarship to play NCAA basketball.

“The UCCM Police Commission is confident that Mr. Whiteye will be a welcome addition to the lead the team as he possesses a diverse policing background and a solid understanding of First Nations policing. A welcoming ceremony is being planned with our Commission, Staff, Chiefs and First Nations at a future date, once Mr. Whiteye and his wife are settled. We hope everyone will welcome them to our beautiful Manitoulin Island” adds Nahwegahbo.

The Commission would also like to take this opportunity to say Chi Miigwetch to Yves Forget who has served as interim Chief of Police for the past several months while the search for a Chief of Police was being carried out.