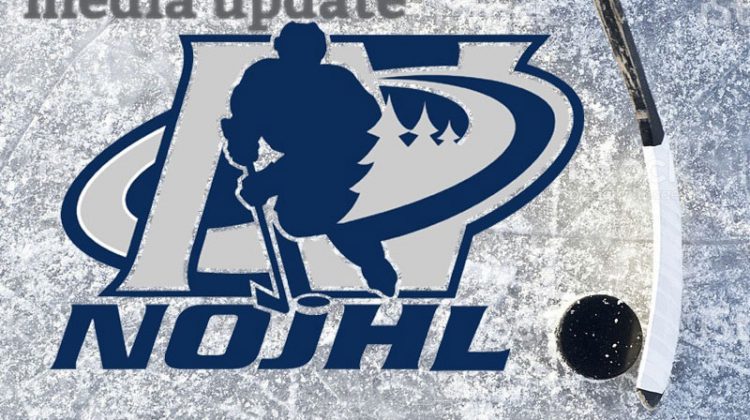 Special teams saw each side strike shorthanded in the first frame to commence the evening’s scoring.

Nicholas Grandy’s man-down effort put Cochrane in front at 7:09 only to see the Beavers’ Caleb Serre do likewise a few shifts later as he notched his NOJHL-leading 31st tally of the campaign to level the proceedings.

Blind River then took the lead at 15:37 of the first period when Savignac picked up his first of the evening.

He then tallied twice in the first portion of the middle session to put the Beavers up 4-1 with half a game to play as he collected goals nine and 10 on the season.

Tyson Moore cut into the deficit for the Crunch at 9:16, only to see Blind River’s Blake McNally notch his initial marker in his league debut three minutes later.

Answering that, Cochrane’s Michael Mizerak picked up his opening NOJHL goal 60 seconds later to make it a 5-3 game after two.

The Beavers then put the game away in the third as Tyler Nott, with two, and one from Kyle Quinn capped off the Beavers’ victory.

Savignac also chipped in with an assist for a four-night night while McNally, Jake Behnen and Bryan Classey added two helpers apiece.

Shots on net were 48 apiece with Jackson Hjelle recording the win while Tomi Gagnon suffered the defeat.

BLIND RIVER, Ont. – A Mitchell Martin marker was the only one in the shootout as the Rayside-Balfour Canadians pulled out a 6-5 decision over the Blind River Beavers in a high-scoring Northern Ontario Junior Hockey League contest held Saturday at the Blind River Community Centre.

A frenzied pace in the first frame saw the two sides tack on five tallies in less than a 10-minute span, including three by Blind River.

The Beavers’ Christopher Mingus started the offensive barrage as he notched his first NOJHL marker at 4:38.

Rayside-Balfour then countered with a pair of markers courtesy of Gavin Brown to go up 2-1.

Answering that, Blind River then got goals from Lucas Adams and Devon Savignac to put the hosts up 3-2 through one.

Action in the second stanza saw each side pick up two more each to make it a 5-4 game heading into the intermission with Zachary Snow and Zacharie Griroux connecting for the Canadians while Savignac and Kyle Quinn countered for the Beavers.

In the third, the back and forth affair saw the visitor’s force overtime with 4:21 remaining thanks to Brady Maltais.

After a scoreless five-minute OT, extra shots were needed to decide the outcome.

There it was Martin who was the only one among six attempts to convert as he slid a low shot underneath Beavers netminder Jackson Hjelle.

Canadians goaltender Cameron Lamour made 35 stops, plus all three he faced in the shootout, to record the win while Hjelle had 33 saves in helping Blind River pick up a point in defeat.

ELLIOT LAKE, Ont. – Elliot Lake Wildcats goalkeeper Jonathan Lemaire stopped all 43 shots he faced to post his first Northern Ontario Junior Hockey League shutout in backstopping his side to a 3-0 victory over the French River Rapids Friday at Centennial Arena.

The Wildcats got the eventual game-winner four and a half minutes into the contest on the eighth tally of the campaign from forward Owen Kruse.

Kruse then helped set-up Elliot Lake’s second marker of the night, which came 17:16 of the middle session, as Jonathan Giancotti also notched his eighth goal of the season.

In the third, Jaydyn Parnell added some insurance for the Wildcats in rounding out the scoring in the proceedings.

Lemaire did the rest in holding French River off the score sheet and pick up his initial victory in an Elliot Lake jersey after being acquired from Blind River last month.

Rapids starter Sebastian Woods made 27 saves in defeat for his side.

Cochrane comes back to win in Espanola

ESPANOLA, Ont. – The Cochrane Crunch collected a pair of third-period power-play goals to earn a 3-2 come from behind victory over the Espanola Express Saturday in Northern Ontario Junior Hockey League play at the Regional Recreation Complex.

Cochrane connected early to take the lead in this one as Kobe Barrette picked up his second of the season, which came 3:05 into the match-up.

Countering, the Express got on track 10 and a half minutes later with Cole Delarosbil knotting the affair.

Espanola then went in front late in the first as they capitalized on the power play when Alex Simard finishing off the work of teammates Camilo Rodrique-Melo and Josh Boucher.

Neither side would get a goal in a scoreless middle session as the home side carried their slim lead into the third.

On the power play to begin the third, the Crunch picked up the equalizer 57 seconds in as Matthew Minichiello knocked in his 11th of the campaign.

Not done there, Cochrane’s special teams clicked yet halfway through the session on an Owen Perala man advantage effort that proved to be the difference-maker.

The guests held firm defensively from there to secure the road decision.

Crunch netminder Tomi Gagnon made 32 saves to record the win while Express starter Joel Rainville had 28 stops in defeat.