MPP Gélinas’s bill would protect kids from picking up vaping 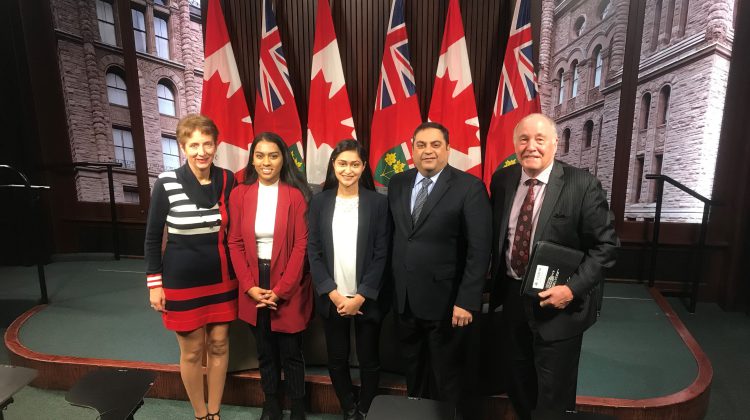 Gélinas and a number of other health organizations met at Queen’s Park yesterday to introduce the bill she says would set up firm obligations to prevent Ontario youth from picking up vaping and becoming addicted to nicotine.
She adds the bill would be comprehensive restricting sales to specialty shops, requires Ontario Health to prepare an annual report on vaping usage and health effects and also set tax money aside for research.

“Given how little we know about the long-term effects of vaping, it’s imperative that Ontario uses the precautionary principle when allowing a product like this onto the market. We are far behind other jurisdictions when it comes to protecting our youth from the predatory practices of the vaping industry, and it is time to catch up,” adds Gélinas.

Michael Perley, the Ontario Medical Association’s (OMA) chair at the Ontario Coalition Against Tobacco (OCAT), supports the bill.
“Thanks to an inadequate and permissive federal vaping legalization framework and to the aggressive promotion of flavoured vaping by the tobacco industry, more and more Ontario kids are becoming addicted to nicotine every day,” said Perley. “The provincial government needs to take strong action now to block industry nicotine promotion to our kids. Banning all flavours except those specifically permitted, and restricting vaping sales to specialty vaping stores, as Madame Gélinas proposes, will help align vaping regulation with tobacco regulation. It will also reinforce the government’s recently-announced retail vaping promotion ban. We urge the government to immediately adopt this bill as its own, and thank Madame Gelinas for this important initiative.”

Dr. Atul Kapur, Executive Director of Physicians for a Smoke-Free Canada, also supports Gélinas’s bill.
“It took decades for us to learn the health effects of smoking. We are now at the same early stages with vaping,” said Kapur. “If we are going to learn the lessons from smoking, we need to be more cautious about how we allow these products to be marketed. Recently, the legislature in Prince Edward Island unanimously adopted measures to protect youth in that province. We would hope and expect similar all-party support for this bill, too. Our enormous gratitude to Ms. Gélinas and her team for continued championing of this important file.”

“MPP Gélinas’ legislation takes concrete steps to reduce youth vaping and deserves support. We urge all Ontario MPPs to support the bill. We have made such progress at reducing youth smoking that we do not need a new generation of teenagers to become addicted to nicotine through e-cigarettes. Restricting flavours and limiting where e-cigarettes can be sold are necessary measures. The sooner legislation is adopted, the sooner Ontario’s youth will be protected,” adds Helena Sonea, Senior Manager of Public Issues, Canadian Cancer Society

“NPAO is pleased to support any legislation that promotes healthy public policy for Ontarians, such as this bill to limit exposure to the harms of vaping, says Dawn Tymianski, Chief Executive Officer, Nurse Practitioners’ Association of Ontario

“Parents are concerned about how harmful vaping is and what effect it could have on our kids. The government should be regulating attractive flavours so that kids are not motivated to try them. We hope for continued education campaigns against youth vaping. We also want to ensure school staff and administrators are given the resources needed as they educate our children about the long-term effects of vaping,” Annalisa Crudo-Perri, President, The Ontario Association of Parents in Catholic Education

George Habib, President & CEO, Ontario Lung Association adds, “The Ontario Lung Association is deeply concerned about the rising youth vaping rate and the rise in vaping related lung illnesses. The research available demonstrates that vaping can be harmful to the lungs in many different ways and inhaling the toxic chemicals found in e-liquids can cause long-term, irreversible damage to the lungs of our youth. We are in favor of stricter regulations including increased restrictions on the sale of vapour products and flavors, further constraining advertisements and promotions, limiting nicotine levels, and other measures that work towards protecting Ontarian youth from the lung health risks associated with vaping.”

“The proliferation of vaping product use in recent years—especially among Canadian youth—is cause for concern to all of us. Although the long-term effects of vaping are still unclear, we know that vaping can exacerbate asthma symptoms and other respiratory illnesses. Moreover, vaping is leading to a reversal of decades of anti-smoking progress, which is deeply troubling. As such, Asthma Canada stands behind the new amendments proposed in the bill Vaping is not for Kids,” Vanessa Foran, President & CEO of Asthma Canada.

“We need to take urgent and immediate action to head off the creation of a new generation of young people addicted to nicotine. The evidence of the harms of vaping, especially for youth, is mounting almost daily. We must apply the learnings from decades of successful tobacco control policy and this legislation does that,” concludes Dr. Andrew Pipe, Chair – Heart & Stroke, Canada.

The bill was introduced in the house yesterday afternoon.