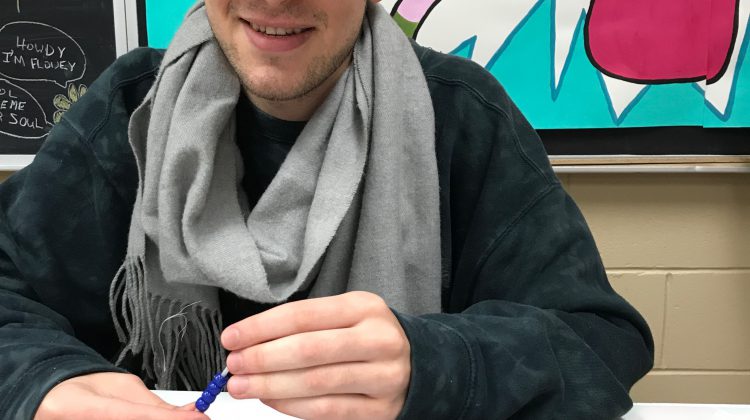 Rainbow school students will take part in activities and lessons to create awareness about treaties and treaty relationships, including Nick Guertin of Barrydowne College, who will continue to work on a traditional Wampum Belt that he designed, inspired by the 1764 Treaty of Niagara. Photo supplied by RDSB.

This is the Fourth Annual Treaty Recognition Week in Ontario and schools are hosting various activities acknowledging that history.

Locally, students at Assiginack Public School on Manitoulin Island will have lessons about treaties and friendships and will create treaty medallions using art.
Junior/intermediate students will learn about treaties history and Wampum.

Anishinabek Nation Grand Council Chief Glen Hare says every student should know that there are 46 treaties in Ontario and should also understand the rights, responsibilities, and relationships of First Nations with the federal and provincial governments.

Several books have also been produced to help teachers teach students about the treaty relationship, including We are all Treaty People and Nation to Nation by Maurice Switzer; and Dakota Talks about Treaties, and Alex Shares his Wampum Belt by Kelly Crawford.

Treaties Recognition Week was introduced in 2016 to honour the importance of treaties and to help Ontarians learn more about treaty rights and treaty relationships.

Our government is working with Indigenous and education partners to deliver treaty awareness events in schools, universities and public libraries. Indigenous Elders and Knowledge Keepers will deliver teachings and provide their personal perspectives to help deepen the understandings of treaties.

Treaty relationships are as relevant today as they were when they were first signed. As a nurse and lawyer who lived in and worked with First Nation communities, I’ve seen first-hand the importance of making modern treaty relationships real and meaningful for Indigenous and non-Indigenous peoples alike. Promoting awareness and understanding of treaties helps to advance us along the road of reconciliation and ensure everyone can participate in Ontario’s prosperity.”