Cyclists coming through on Highway 17 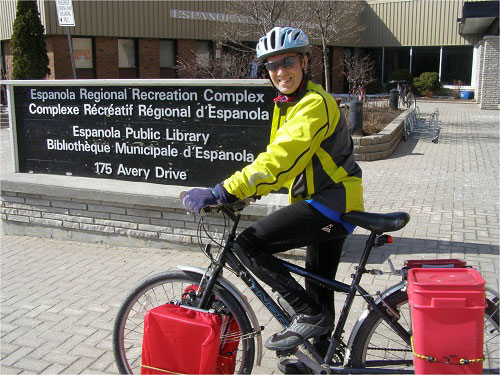 A contingent of 145 cyclists will be winding their way east to Espanola today. They will converge at the Espanola Regional Recreation Complex in the late afternoon for an overnight stay before continuing their travels to Sudbury. Photo supplied by espanola.ca

Motorists traveling west between Blind River and Espanola may want to slow down with dozens of cyclists on Highway 17.

She says the 145 cyclists are riding the 450 kilometers to Sudbury through 23 communities and three First Nations.

The group left Blind River this morning and is making its way to Espanola for an overnight stay at the Espanola Regional Recreation Complex.

Espanola was designated part of this first provincially recognized cycling route in Northern Ontario a year ago as part of The Great Trail, Canada’s National trail system.

The cyclists will be riding along Highway 17 but will come into Espanola via Lee Valley Road from Massey.

“We now have a fantastic cycling route that connects people from Southern Ontario to Northern Ontario along with the world’s largest group of freshwater lakes,” explains Koehler, who oversees the trust, which is leading the work to regenerate the Great Lakes with the creation of the Trail.
With the expansion, the Great Lakes Waterfront Trail now stretches 3,000 km from Quebec to the new western terminus at Lake Superior.
“People can now cycle from downtown Toronto to downtown Sault Ste. Marie—only 1,726 km, 1,750 if you want to dip your toes into Lake Superior.”

“People are going to love this section of the Trail. It is different from any other part of the Waterfront Trail, but equal in its power to remind us of why we love Ontario and our Great Lakes,” adds Koehler. “We are thrilled to make the North part of Ontario’s iconic cycle tourism experience”.

The Lake Huron North Channel celebrates the spirit of the North, following 12 heritage rivers, connecting with 11 northern lakes, winding through forests, Amish and Mennonite farmland, historic logging, mining and fishing villages, and 24 beaches.
The expansion is the collective accomplishment of partnership including local communities, The Great Trail, the Ontario Trillium Foundation, Tourism Northern Ontario, and the Ontario Ministry of Transportation.

This year’s cyclists hail from four provinces (Ontario, Alberta, Quebec and New Brunswick) and seven states (Alabama, Florida, Massachusetts, Minnesota, New Jersey, Arizona, and Pennsylvania) and range in age from 23 to 81.
Thanks to the support of the Toronto and Region Conservation Authority (TRCA), also included in this group are two 2019 Youth Ambassadors from Waterlution, a charity cultivating the next generation of water leaders and advocates.

For more information about the ride please visit https://waterfronttrail.org/great-waterfront-trailadventure/gwta/