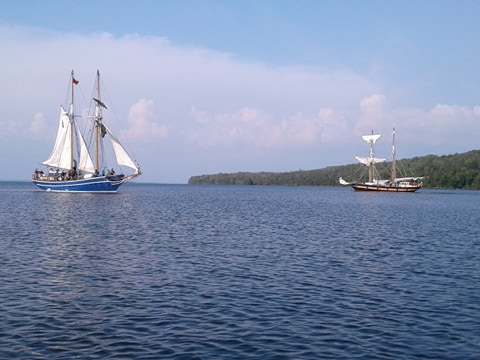 Two tall ships attracted quite a bit of attention off the shores of Manitoulin Island this weekend. TS Playfair is a traditionally-rigged brigantine training ship and the S.T.V. St. Lawrence II is a custom-built sailing ship. The student crews visited several ports on Manitoulin Island this past weekend. Photos supplied by Dave Timmermans.

Two tall ships attracted quite a bit of attention off the shores of Manitoulin Island.

TS Playfair is a traditionally-rigged brigantine training ship and the S.T.V. St. Lawrence II is a custom-built sailing ship, which toured several ports around Manitoulin Island this past week.

The two are unique in that they offer students to opportunity to sail around the Great Lakes during the summer months and literally learn the ropes when it comes to sailing big water.

The program is a rare one since all of the crew except for the captain are in high school.

TS Playfair is a traditionally-rigged brigantine training ship operated by Toronto Brigantine Inc., a sail-training Canadian registered charity based in Toronto. Playfair is used for a youth sail training program on the Great Lakes during the summer months. There is a crew of 21 aboard.

The summer training is followed by a winter program where youth work through higher levels of training syllabus to become accredited members of the crew the following year.

Playfair was constructed for Toronto Brigantine Inc. in 1973 as an addition to an already established sail training organization which began operation with the STV Pathfinder in 1962.

During the Royal Visit to Canada in 1973, Queen Elizabeth II christened Playfair at her launching in Kingston on Wednesday, June 27TH with Pathfinder docked just astern; Prince Philip was in attendance.

She was commissioned by Her Majesty Queen Elizabeth II in 1974 and remains the only Canadian ship to be commissioned by a reigning monarch.
Although very similar to sister ships Pathfinder and St. Lawrence II, there are several minor structural differences such as a wider transom and a slightly larger freeboard. Since 1974, Playfair has conducted sail training on the Great Lakes with occasional summer voyages down the St. Lawrence River to the Atlantic, most recently in 2007 for Tall Ships Halifax.

The STV St. Lawrence II (Sail Training Vessel) is a 72-foot (22 m) brigantine designed for youth sail training and is operated by a crew of 14- to 19-year-olds.
It was designed in 1952 by Francis MacLachlan and Mike Eames, designed for the sole purpose of youth sail training.
The hull was built in 1953 in the Kingston, Ontario shipyards, with the rest of the ship finished by local craftsmen, Kingston sea cadets, and enthusiastic amateurs. When the St. Lawrence II first started out she was affiliated with the Royal Canadian Sea Cadets Corps St. Lawrence, but eventually her program was opened to any participants ages 12–18 for a summer training cruises.

The St. Lawrence II’s home port is Kingston, Ontario. The ship sails mostly in the Great Lakes and the St. Lawrence River, but sometimes will venture as far as New York City. The success of the St. Lawrence II was the inspiration for the construction and launch of her Toronto-based sister ships STV Pathfinder (in 1962) and TS Playfair (in 1973), with both training vessels also being designed by Francis A. MacLachlan.

Aboard the ship, there are three watches: red, white and blue. Each watch is under the direction of a watch officer; the remainder of the watch consists of a petty officer or chief petty officer and up to 6 trainees. Those who sign on to the St. Lawrence II for a course during the summer become trainees who make up the basic unit of the ship and who complete most of the tasks, directed by petty officers.

On each watch, the watch officer is the senior officer and is usually at the helm or plotting a course so it’s up to the petty officers to get the trainees to do their part. Other positions on the ship are the cook, the bosun, the executive officer, and the captain.

The captain and the executive officer are usually the only people on the ship who are over 18 years of age, and they are the most qualified. The watch officers, cook, bosun, and petty officers are often under 18 but they will have participated in multiple training cruises and completed further training during the winter training program. 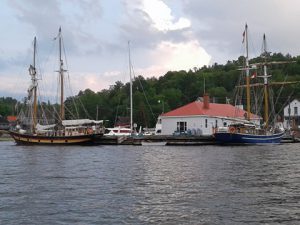