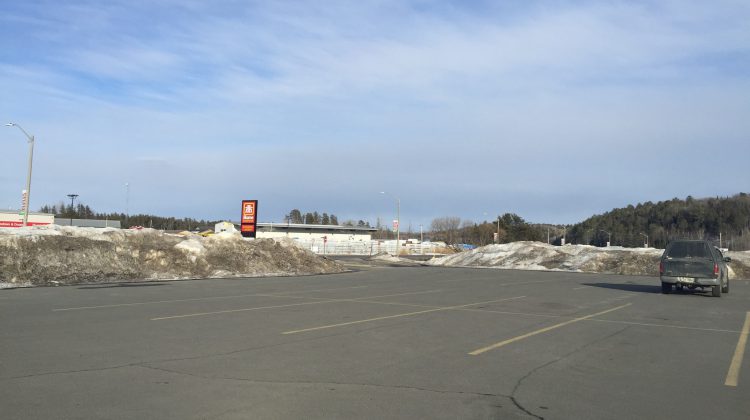 A new A&W restaurant will be built in this area of the Canadian Tire parking lot in Espanola. Council also gave approval for a permanent garden centre/storage facility. Photo by Rosalind Russell – MyEspanolaNow.com staff

There were some concerns raised by members of the audience at a public hearing held by council Tuesday night in regards to safety issues involving a new restaurant in the works in Espanola.

Plans for a new A&W restaurant were announced over a month ago and as a part of the process, a public hearing to consider a zoning amendment was held.

Some audience members feel there is a safety issue with the location of the restaurant at the south end of the Canadian Tire parking lot because there is an entrance for north bound traffic to enter the property, but not south bound.

However, Planner Sarah Vereault of J.L. Richards says the main entrance with traffic lights would be considered the main entry point for traffic.

She told council the site plan has been reviewed and the amendment would allow for a reduction in parking spaces to allow for the restaurant and a permanent garden centre/storage facility for Canadian Tire.

Council approved the amendment and the project will now move ahead with the next step in the process.