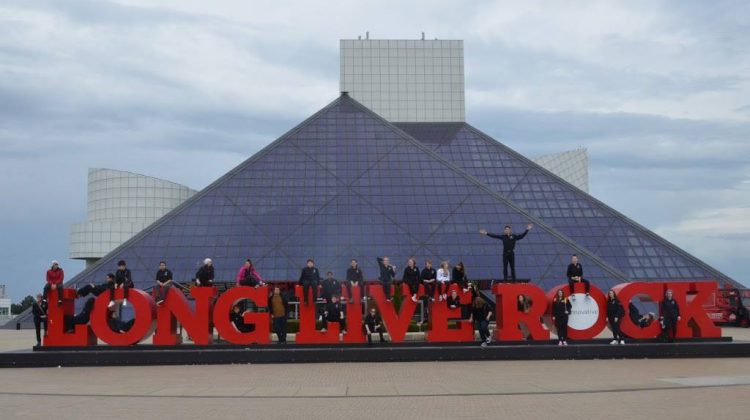 Fund-raisers helped the students pay for their trip to Cleveland, Ohio last week to not only tour, but play at the world renowned Rock and Roll Hall of Fame. The Espanola High School Jazz Band under the guidance of their director, Tracy Mark, made the trip last week. Photo by Tracy Mark

They got to rock it out at the Rock and Roll Hall of Fame, thanks to support from the community and the Espanola Royal Canadian Legion Branch #39.

Mark shares kudos with others in making the trip such a success.

“Brightspark and Sara Nicholson did it again. They planned an amazing trip that the kids loved and our tour guide, Amelia, was great with this being her first trip to Cleveland and her first high school music group. Everyone is already talking about where to go next year and requesting that Amelia join us. Special thanks to all the chaperones and shout-out to the parents and guardians for raising such wonderful young people. I love my job!” exclaimed Mark.

They performed at the Rock and Roll Hall of Fame.

“We were originally scheduled to perform on the outside stage, but due to the pouring rain, the manager was able to shift some things around and changed our performance time, so we were able to perform inside.
“Students from the Lancers Marching Band stayed to watch us perform and some new friendships were made.”

The trip itself was also an adventure.

“And, it wasn’t a competition,” says Mark. “We didn’t compete. It was a great performance opportunity for the kids. They can now say they are Rock and Roll Hall of Fame performers!”

“We toured the home from the classic movie A Christmas Story (don’t worry, no one shot their eye out). Had a backstage tour of Severance Hall, the most beautiful concert hall in America. We went to the museum of art and also toured the Rock and Roll Hall of Fame. We got to ride a red trolley and get a guided tour of the city and all the landmarks and learn about its history.

And Mark also discovered an interesting fact: the founder’s name is actually spelled Cleaveland, but due to a misprint in the paper way back when, the city name dropped the “a”. “We also went to see the production of the Phantom of the Opera. Our tour guide, Amelia, was surprised at how many kids were Team Phantom. She is Team Raoul.

And, on the final evening, we went to the Music Box Supper Club where there was a live band who’s opening song was the same as our opening song at our performance (The Chicken). The kids loved it!”

Mark says the trip wouldn’t have been a dream come true without the help of the families and the community at large.

“This year, we sold chocolate bars, cookie dough, pizza kits, chocolate covered pretzels and hosted the meat roll off at the Legion in January and again in April.”

Tracy Mark started making the stuffies five years ago and once the tradition started, there was no way the kids would let her stop.
“I figured everyone needs something to cuddle and it’s no fun if you forget your fav stuffies at home,” explained Mark.  “I have a few orders after the trip for stuffies people saw in pictures and will use the money to cover costs of materials. Each stuffy or critter takes four or more hours to make depending on size. The bigger ones can be a full weekend project.”

The trip was chaperoned by Mark, her parents, Don and Karen Finucane, and parents Dianna Boivin, Brian Coyne and Rob Forcier.

“The music students of Espanola High School represented our school and town in a way that would make anyone proud. They were inquisitive, polite, friendly enthusiastic, punctual and we had loads of fun,” concludes Mark.

One of the students, Heidi Meier says “it was beyond amazing to experience the Rock and roll Hall of Fame as a performer and not just a tourist. It helped me and my band bond and grow as performers.”

The trip was paid by fundraising throughout the year including meat roll offs hosted by the Espanola Royal Canadian Legion this month.