The deer are in serious trouble 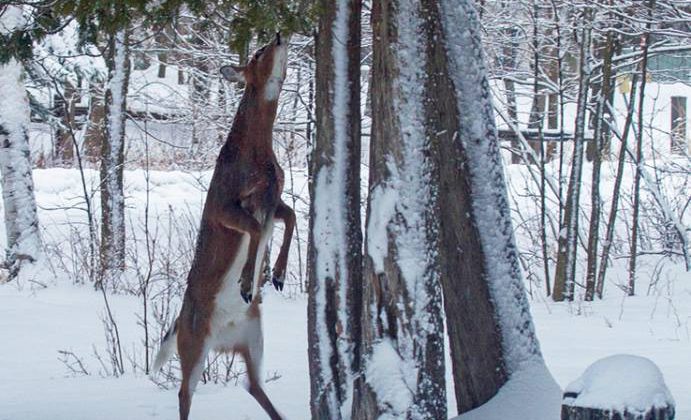 The LaChoche Deer Herd and Whitefish Mountains Herd are in danger of extinction according to Espanola Game and Fish Association President, Leland Morley. Photo provided by Garnet Beer.

The deer are starving and a local game and fish member says deer are dying in droves because of the harsh winter conditions.

Leland Morley, the president of the Espanola Game and Fish Protective Association says this is the second extreme winter deer kill off in the last ten years and that could spell disaster for the herd.

Morley says there was a big kill off back in the late forties and game and fish clubs brought in deer to re-establish the herd, and once again in the late sixties and early seventies.

Morley emphasizes the LaCloche Deer Herd and Whitefish Mountains Herd are one big one that are in jeopardy of extinction this winter.

Still with the story, Garnet Beer is asking volunteers to come out tomorrow to Garnet’s rental at 12:15pm, and then the group will head out to the old rail bed near Whitefish Falls to pack trails and cut cedar boughs for the deer.

The association has received funding from the Ontario Federation of Angler and Hunters and ministry approval to feed the deer in the Whitefish Falls and House Lake area.

He adds, “all we can hope for is saving enough deer this winter to bring back this great resource back to past year’s status.”

Having members of the public helping to break trails and cut cedar boughs are good starts.
“We ask that they don’t cut the whole tree down because deer also use these big cedar as canopy shelters.”

He also recommends deer be fed a fifty/fifty mix of corn and oats because pure corn is too rich and could kill them.

“With experience from the Ministry of Natural Resources and Forests biologists, we have the proper formula for feeding: this consists of a mixture of corn and oats along with cedar boughs, this will change after couple weeks too more fifty /fifty mix of corn and oats.
“Giving deer pure corn will kill them unless you’ve been feeding all year long. Pure corn is too rich and their system can’t handle it.”

Morley adds everyone’s help in volunteering and coming out for a few hours to help the deer is much appreciated.